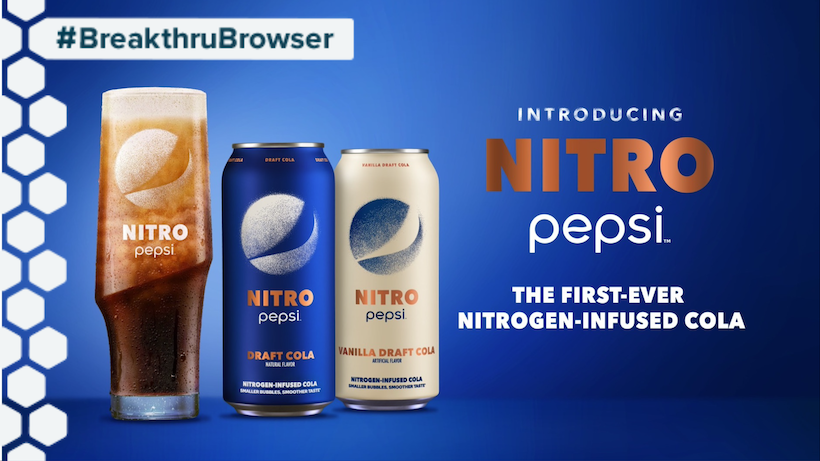 Starting March 28, Nitro Pepsi will be available on shelves in the United States. Unlike a traditional carbonated soft drink, Nitro Pepsi uses nitrogen gas—more commonly used in beer and coffee beverages—to create “a silky, foamy texture.” Pepsi will borrow a concept patented by Guinness for releasing nitrogen from a widget when the beverage can is opened. Pepsi believes that its new drink, which will be available in regular and vanilla versions, can appeal to those who don’t like carbonated beverages.

Neon has brought NFTs into the real world—kind of. A new vending machine in Manhattan allows visitors to make purchases from the Solana NFT marketplace 24 hours a day with their credit card. Aside from traditionally operating in the digital space, NFTs are also typically sold through cryptocurrency exchanges. The Neon vending machine aims to break down multiple barriers of entry to NFT ownership by allowing the 80% of Americans who have a credit card to purchase an NFT, rather than just the 16% who own cryptocurrency.

The Target-owned Shipt delivery service has announced major nationwide expansion via partnerships with Walgreens and 7-Eleven. With the service set to launch in approximately 6,450 7-Eleven locations and 6,300 Walgreens stores, Shipt will grow its available retailer count “by more than 40%.” This is part of an aggressive expansion effort by Shipt as it competes with rival services like Postmates, DoorDash, and Instacart who all already have partnerships with Walgreens and 7-Eleven.