#BreakthruBrowser: TikTok and BeReal, On, and m-commerce 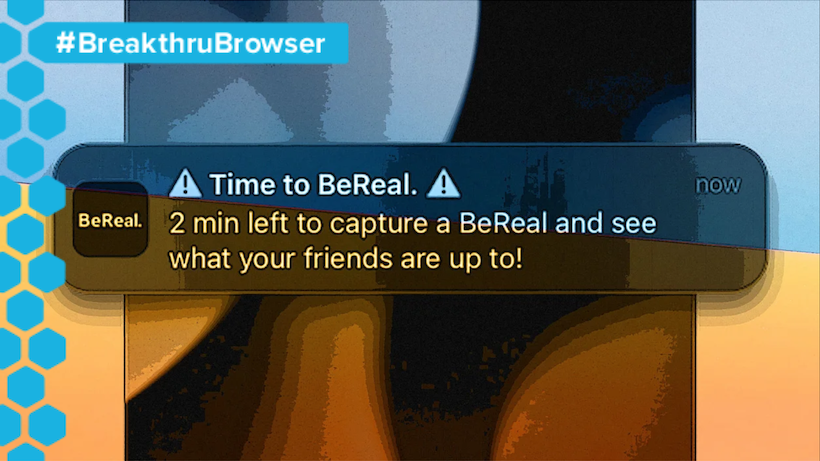 BeReal, the new social media app that has shot to the top of the Apple App Store charts, is facing renewed competition as other social platforms aim to clone BeReal’s signature feature. Each day, the image-sharing app prompts “users to quickly take and share a real-time image”—always at a different time of day. TikTok has responded to the upstart by announcing TikTok Now, a similar feature that prompts users to share real-time images or 10-second videos. Meta is also internally testing a similar feature for its Instagram app.

On unveils shoes made from captured emissions

Sportswear company On has debuted Cloudprime, its shoe “made entirely from captured carbon emissions.” While the shoes are not being made for sale, they’re an interesting attempt to display the possibilities of carbon-captured materials as the company aims to be fossil-fuel-independent by 2030. On has been working on the new shoe technology for five years and still hopes to bring it to the market in the near future. Its current proof of concept is manufactured using carbon emissions from a steel factory in Belgium, but the company maintains the project is scalable.

M-commerce, or mobile shopping, represents a major shift away from traditional e-commerce in recent years. Throughout the COVID-19 pandemic, shoppers gravitated toward placing delivery, curbside, and pickup orders across retailers through mobile apps. That trend appears to be here to stay, as 69% of consumers now prefer a mix of in-store and online shopping. Many stores are still struggling to manage real-time updates on out-of-stock items, as well as managing pickup and curbside orders, so retailers need to continue to adapt and evolve.